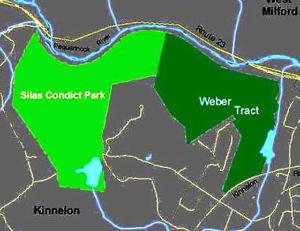 Thanks to a combined state, county, and local government effort, a push from environmental groups and a grass roots citizens’ campaign, the acquisition of the 164-acre Weber Tract became a reality on Wednesday.

On June 8 the borough closed on the purchase of the 164 acres and immediately afterward closed on a transfer of 62 of those acres to Morris County, which will extend its adjacent Silas Condict Park. The roughly $2.8 million purchase was made possible largely though the acquisition of grant money. 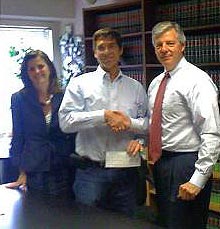 After the closing, Mayor Robert Collins recalled the lengthy battle to preserve the acreage.

“It was an arduous process, but we accomplished it with the involvement of the residents, elected officials and outside funding agencies,” said Collins. “Ultimately we accomplished our goal of preserving environmentally sensitive property in order to protect our aquifer. I’m extremely pleased that the transaction has been completed and a number of residents are overjoyed.”

Collins said the borough intends to use the parcel for passive recreation.
Ten years in the making

Carol Vreeland, who headed a citizens campaign to preserve the tract, said more than 10 years ago surveyors piqued the neighborhood’s interest by planting spikes with pink ribbons on the parcel with many of these spikes marking wetlands. The neighbors began talking about what they could do to ensure the preservation of the property, she said.

There were various development scenarios kicked around for the property, but in 2002 a developer asked the Borough Council to rezone the property from light industrial to age-restricted residential. There was a plan to cluster develop 26 of the 169 acres with multi-unit residences. However, after the state Highlands Act was enacted, an attorney representing the Villas at Maple Lake LLC (Roseland Properties Inc.), which wanted to build 136 age-restricted units and a road on the Weber Tract asked the Planning Board in November of 2004 to dismiss his client’s site-plan application without prejudice. The Weber Tract is located in a preservation zone.

Vreeland thinks, at less than $17,000 an acre, the purchase of the tract was a good investment.

“We are thrilled. It’s been a long time,” said Vreeland. “We are delighted the closing finally has taken place. Now we can work on our map and locate the trails and make good use of the property.”

Vreeland will get no argument from Ross Kushner, executive director of the Pequannock River Coalition (PRC), who supported the preservation endeavor.
Team effort

In a statement, Kushner acknowledged that the PRC began pushing for the property’s preservation in 2002 when Kinnelon was rezoning the tract for high-density housing, despite the steep slopes and wetlands that compose much of the property and its position adjacent to the Pequannock River.

“We were told it was a done deal and we were wasting our time in opposing it. But we have heard that before. Today I am delighted to report that the tract is now fully preserved, in part as municipal property, and in part through the Morris County parks system,” said Kushner.

“PRC was joined in this effort by outstanding local officials like Kinnelon Mayor Robert Collins, and hard-working citizens such as Carol Vreeland. We had the stream on the property evaluated by the state in 2006 and upgraded to Category 1 status, and made sure the Highlands Act gave full due to the sensitivity of this land. By refining our position and remaining focused, we were able to assist in an achievement that few thought possible. While many had a hand in making this happen, PRC’s role was substantial,” said Kushner.

When the Borough Council considered the ordinance in November of 2009 that would facilitate the purchase, Kushner called the Weber Tract “the crown jewel” among the remaining potential purchases in the Highlands.

Kushner noted that when the borough conducted a survey in conjunction with the creation of its Open Space Master Plan in 2005, 80 percent of the respondents identified Kinnelon’s “rural character” as “very important.” Eighty-nine percent ranked preserving scenic vistas as a top priority for preservation in the borough. Eighty-five percent gave a high rating to preserving land for the protection of ground and surface water.

There were some local officials who felt the age-restricted development would be a good ratable because it would not introduce children into the school district and would leave large portions of the property undeveloped. Some officials also took the position that the property was preserved by virtue of it being located in the Highlands Preservation Area and therefore funding should not be spent on its purchase. However, the majority of the governing body and the vast majority of residents attending meetings supported the acquisition of the tract for preservation purposes.